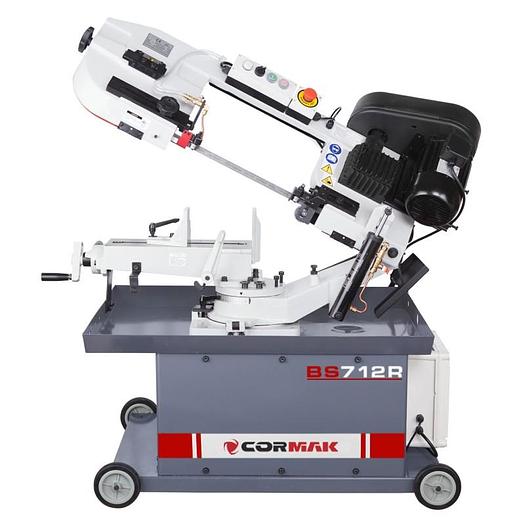 Machine Description The design of the arm has been modified so that the machine can be changed from a horizontal to vertical position with ease. The feed during cutting is carried out by gravity on the principle of oil flow in a two-chamber hydraulic cylinder. The band speed is adjusted via belts. The arm feed speed is by means of a regulating valve. The arm, made of profiled ductile iron, ensures rigidity during operation and absorbs all kinds of vibrations. The control panel is located on the saw arm for comfort of use. The blade drive system consists of two cast iron wheels. The first is called the winding wheel (adjustment takes place via a lever), the second is the drive wheel. The drive wheel transmits the torque directly from the worm gear, while the worm gear is driven by the electric motor. The appropriate angle of inclination of the blade is given by a set of bearing rollers. The base of the machine is a rigid and made of steel. Inside there is a coolant reservoir with a coolant pump. Thanks to the torsion vise, we can cut material at an angle of 0-45 degrees. To the upper part of the machine base there is a coolant drainpipe and a chip tray. Safety during the cutting process is ensured by an electrical installation that meets all CE requirements. The machine has a limit switch stopping the machine after finishing the cutting process, an emergency stop switch, a series of micro switches that switch the machine off when, for example, we open the belt transmission cover or sheath band guard. In addition, our machine model is equipped with a wire brush that cleans the blade from chips - it prevents the blade from clogging and gives a more effective cut.